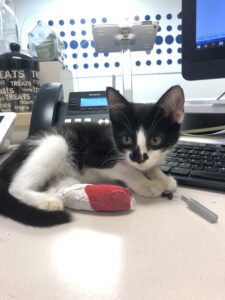 Toast was brought to the APA, after hours, by a kind woman and her young her son who had found him in their yard when he was just a tiny kitten. APA staff were still here for an evening event, so they were able to make sure he got signed in and settled in safely for the night. Toast had a hole in his leg that was full of litter and debris, but APA vet techs were able to clean it out and make sure Toast was comfortable. Had he not been brought to the APA, a deadly infection could have set in, and Toast may not have survived…but Toast received his second chance at the APA! 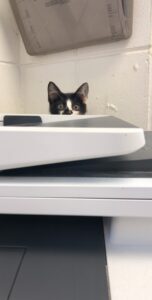 During his stay at the APA, recovering from his injury, Toast became a favorite at the clinic, helping Kaitlin, the clinic manager, with various duties at her desk, including playing with pen caps and paper clips, playing hide and seek, and watching all of the clinic activity. One could usually find him resting near the printer or computer monitor (where it’s nice and warm) or right on a cozy stack of papers that Kaitlin needed to access. 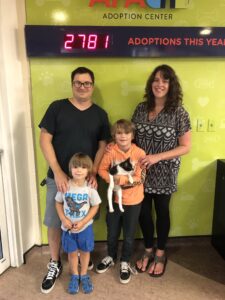 Toast’s family visited the APA in early September, searching for a kitten to add to their family.  Elliot (age 8) and Theo (age 4) picked Toast (now Oskar) immediately, and they didn’t need to see any others!  According to parents Erin & Brian, it seemed destined that Toast would join their family!  The APA adoption counselor who assisted them mentioned how much Toast had been through, but she thought his resilience and overall tolerance would be the perfect fit for the two young boys. As it turns out, she was right! Toast has been almost comically tolerant in the way he lets Theo carry him around the house like a baby, hugging and squeezing him. His leg injury hasn’t affected him as he has grown. He’s become a strong jumper/runner, galloping around the house and up and down the stairs. According to his family, since his first few days in his new home, he has been nothing short of a perfect little kitty, very sweet and snuggly. Most nights he cuddles with Elliot in bed or snoozes on the couch while the family watches TV. 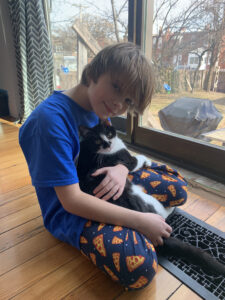 “He’s our first family pet, and we couldn’t imagine our lives without him!”

Toast loves sleeping in the morning sun on his stairway perch or gazing out the window at the squirrels and trees in the backyard. His favorite activity is batting around his fish taco, as if he is playing kitty soccer trying to score a goal. He’s very fast, darting across the floors in an attempt to surprise toy mice and the boys. He also loves to curl up in the “Kit car” that Theo made for him out of a cardboard box. He’s always ready for a snack and positions himself under the action in the kitchen during meal prep and dinner time, waiting for anything to fall on the floor. He’s always very vocal about his love of fish and meat! 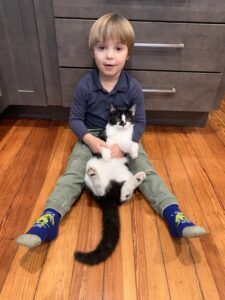 We are so grateful to Toast/Oskar’s new family for adopting him and giving him a second chance at love and life! 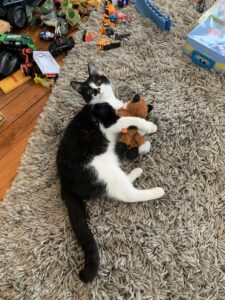