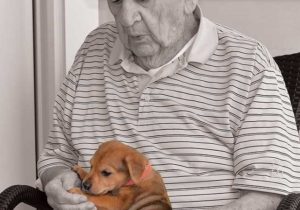 The APA’s FosterCare program was launched earlier this year and places animals still too young for permanent families into temporary foster homes. These animals, explains Ashton Keenan, FosterCare coordinator, include kittens and puppies anywhere from a few days to 8 weeks old. After that, they can be spayed or neutered and given to their ‘forever homes.’ Placing very young animals in foster homes also reduces exposure to illness during the early weeks of life and provides critical socialization. “This arrangement is a win-win situation for all involved,” Keenan says.

Stonecrest, an assisted living and memory care facility, has hardly been without an animal since the program began. “Our residents love, love, love these pets,” says Erika Holmes, Stonecrest’s Vibrant Life director. “Not only do they make them happy, but if they are walking the puppies, they are getting exercise as well. The program is therapeutic for both body and soul.”

Laclede Groves, a Lutheran Senior Services community, also is an avid participant in the foster program. “It is so wonderful to see the pure joy on the residents’ faces,” says Kristina Wille, director of resident services. “Pets provide instant comfort and security, and for seniors who may have had pets all their lives, it makes a huge difference in their well-being.” Wille adds that Laclede Groves already had a partnership with APA through the organization’s PetReach initiative. That program—in existence for more than 30 years—has sent APA staff, volunteers and their pets (mostly dogs) into senior care facilities, psychiatric units, convalescent centers and children’s hospitals. Each dog is evaluated to make sure it is friendly and adaptable to new people and surroundings. “The heart of our mission is to bring people and pets together,” says Kim Brown, APA director of operations. “Life is so much richer for having an animal in it.”

Creve Coeur Assisted Living & Memory Care has participated in PetReach since it opened two years ago, and hosts a volunteer and their dog once a month. “Sometimes, it can be hard to engage [memory care residents],” says Tracy Hickman of the senior community’s activities department. “But they make a connection with the animals instantly. It’s amazing to see.”

Brown adds, “Not only is it comforting for seniors to pet the animals, but it also gives them an outlet to talk about the past and the pets they’ve owned. Everyone gathers around and it becomes the highlight of their day.” Brown says the APA is hoping to expand the PetReach program to include domestic violence shelters. The nonprofit already partners with area agencies to provide temporary care for pets of domestic violence victims.

Pictured at top: Resident Phil Likes with his new friend