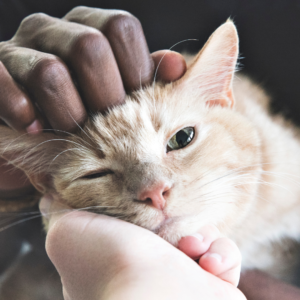 Ollie, an 11-year old blonde tabby cat, came to the APA with his brother, Henry, whose health was rapidly declining due to feline leukemia. Heartbreakingly, staff noticed that Ollie would wrap himself around Henry, as if holding onto hope that he could somehow protect and save his brother from the disease. After losing Henry, Ollie became very depressed and refused to eat, his hope fading away. Our dedicated staff would not give up on him, so instead cuddled him close and provided nourishment through syringe feedings until Ollie could once again eat on his own. After he emerged from his depression, his social personality impressed even the hard-core dog-lovers of the APA staff.

While all of our staff members came to know and love Ollie, there was one person, Jenn, who had an especially soft spot in her heart for this very special cat. She had already been considering adding a senior cat to her “small army”…was Ollie the one? He spent the next 30 days in Jenn’s office getting special attention while he recovered from losing his sibling, regained his appetite (tuna!), and awaited test results to determine if the feline leukemia virus had developed in his own body. Jenn formed a special bond with her new office mate and soon let everyone know that, if Ollie was healthy enough to be around her current pets, she wanted him to join her family. Hope! Ollie soon began to flourish and regained a healthy weight. Each day Ollie greeted Jenn at her office door, his demanding meow growing stronger (and more endearing) each day. He also started what Jenn referred to as an “intense cuddle routine.” Once she was settled at her desk, he would curl up in her lap and snuggle the entire day. He loved Jenn as much as she loved him—she knew he would fit in perfectly with her two cats.

The day after he tested negative for feline leukemia, Jenn took Ollie home – a new family and a new name: Omelette!  Alongside his other feline and canine friends, Omelette can often be found snuggling or looking dreamily out the window. We imagine he is fondly remembering his brother, Henry.  He continues to greet Jenn at the door each time she arrives, but now it’s at the door of his own home.  Hope for Ollie…by way of the APA.