No One Ever Gets Hurt 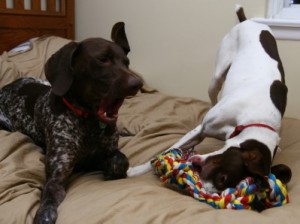 A little over a year ago we adopted our second German shorthair pointer from you guys. We have named him Bennett. He has turned out to be a very different dog then our other GSP. He is usually calmer and better behaved. He was given up because he was “too hyper”. So far we havent found anyone that agrees with this. He does get very excited about his walks but then calms right down. The other GSP we have thinks he’s pretty much the best thing ever. She always has to be around him or seeing what he is up to. He seems to be very happy at his new home. He certainly is spoiled here, and doesn’t seem to mind it at all. I realize some of the pictures look a little .. violent.. perhaps but they really like to play with each other rather hard. No one ever gets hurt.