St. Louis’s top pet advocates will share the stage on April 13th for an open discussion on animal shelters and pet adoption. The panel of experts includes Steve Kaufman (Executive Director of the APA), Brandyn Jones (Executive Director of Animal House Cat Rescue and Adoption Center) and Joy Gioia (Chapter Manager and President of the House Rabbit Society of Missouri).

Join us for a reception from 5:30 pm to 6:30 pm in the Auditorium Lobby on the Lower Level of the Central Library.  You’ll have a chance to meet everyone informally and visit information tables from each group. The program begins promptly at 6:30 pm and ends at 8 pm. It’s a free flowing Q and A format.

So whether you speak dog or cat, join us at the St. Louis Public Library’s Central Conversations Program on Animal Advocacy, on April 13th from 5:30 – 8 pm. Seating is first come first served. Hope to see you there! 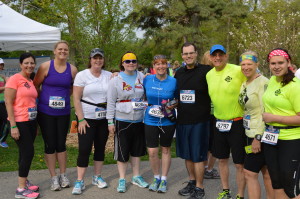 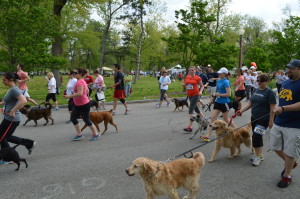 On your mark…get set…GO!

The APA’s 8th annual Fast and the Furriest 5K is just 2 weeks away! We are gearing up and hope you and your pups are too. We are very excited that our race has become a favorite for so many. We have enjoyed our previous races at Tower Grove Park, but we have outgrown the venue with this furry race. Hollywood Casino offers plenty of space for the dogs, the runners and the kiddos with the added bonus of tons of parking!

Even more, we have a generous donor matching participant pledges for this race. Be sure to spread the word that you are running or walking for the APA. You can even fundraise without participating in the race. Share the news on Facebook and ask family and friends to pledge a donation in your honor. Their donations will double for the homeless animals at the APA. Think of the PAWsibilities!

Register HERE and we will see you on April 24th! 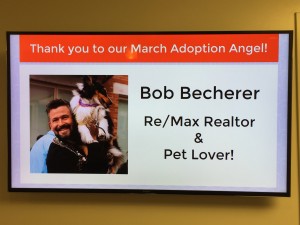 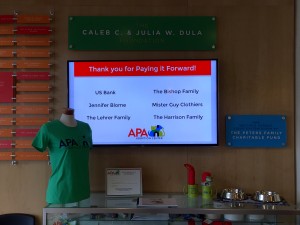 Also, a big thank you goes out to our March Adoption Angel, Bob Becherer, a ReMax Realtor! 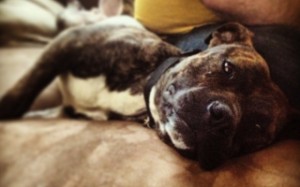 We are so excited with the response we’ve gotten for our Fix-A-Bull program! Thanks to generous donors the APA has been able to offer free spay and neuter surgeries for pit bulls and pit bull mixes. Since its launch we’ve spayed or neutered 35 pit bulls or pit bull mixes. Of the 35, we’ve also provided vaccinations at no charge to 20 dogs who needed them. Additionally, for a small fee, we offer to microchip the dog and have done so for 17 dogs.

While we celebrate this proactive approach, we’ve also seen our wait list grow exponentially. A lengthy wait may result in unwanted litters and/or the dog not getting altered all together. So, we’ve now partnered with Carol House Quick Fix Pet Clinic to help reduce the wait list. They will be performing surgeries for some of those on our Fix-A-Bull wait list at their clinic. We’re so thankful for this great resource in our community and look forward to the collaboration. 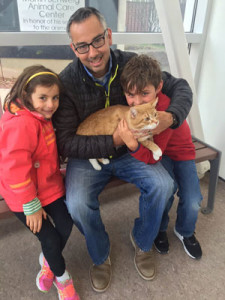 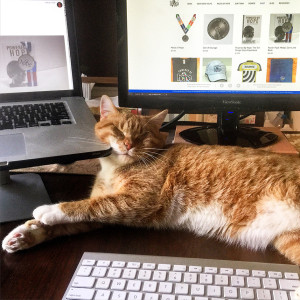 Tom and his two children kept seeing a stray cat roaming the neighborhood. The cat especially liked to hang around their house. One day, this stray decided to take matters into its own paws and follow the two family Corgis into the house. Instantly, the children fell in love with the cat and named him Chalupa. They found out he was more on the lazy side and enjoyed carrying him around like a fireman. Their dad agreed to let Chalupa stay while they tried to find its owner, so the family went to the store and purchased a litterbox, toys and food to keep their new friend comfortable.

After searching and posting photos online and on Facebook, they still had no luck finding Chalupa’s owner. They decided to bring him to the APA to ask for a little more help. After speaking with an Adoption Counselor, Tom thought it would be best to put Chalupa up for adoption. He generously donated the supplies he’d purchased for the stray cat and left a donation to help with the cat’s care, including getting him neutered. Tom’s children gave Chalupa a long hug goodbye and wished him well.

Chalupa settled into his new digs at the APA and was here for three weeks. Throughout that time, Tom would call to check in on Chalupa, due to his children’s curiosity. They were sad to think no one wanted Chalupa. The Adoption Counselor told him kitten season is coming up and everyone wants a kitten, so 2 year old Chalupa sadly wasn’t on the top of many people’s lists.

One day, Tom’s children were off school and want to visit Chalupa at the APA. They were so excited to play with him again and were happy to see that he remembered them. A short while after they had arrived, Tom asked the Adoption Counselor, “What do I have to do to adopt him?”

The Adoption Counselor replied with a smile, “You mean to take your cat back home?”

“I guess I’ll have to buy some cat supplies again,” Tom laughed. And with that, they started the adoption process for Chalupa. When they got to the part about introducing the new pet to any current family pets, the Adoption Counselor and Tom couldn’t help but laugh. The children were grinning from ear to ear.

Then it came time to pay for their new pet. The Adoption Counselor laughed and told them our recommended fee is $200. Tom looked at his children with a knowing look. Tom’s 8 year old chimed in with a big smile, “No, Dad! $201!” Tom made the donation and the happy family left with their (new) cat.

Chalupa has settled back into his home. Tom says all is good with their newest family member, as he lounges on the dryer watching the laundry being folded. The kids are especially happy, and Chalupa is glad they finally realized that he had found them before they found him.