Meet Shayla, one of our amazing transporters! 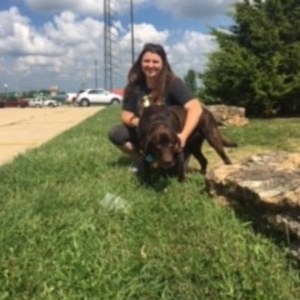 Shayla is one of the many amazing people that we work with through our Transfer Program, which helps needy pets from across the state and country get a chance to be adopted. Last year, with the help of people like Shayla, we were able to transfer in 1,937 pets from other shelters, providing each of them with the second chance they needed. Below, Shayla explains in her own words how she became involved in animal rescue and the kinds of issues that pets in her community face:

“I grew up in the Rolla, MO area and it was apparent from the start that I loved animals more than the average kid. My family took in many pets in need over the years, including dogs that a neighbor abandoned, a momma cat who showed up and had kittens, and a couple of rescue horses. So when I got old enough to drive and happened upon a litter of puppies that had been dumped, it was just natural to bring them home and take care of them.

In 2015, after working 15+ years in retail, I decided it was time for a change. I found out about an animal shelter and dog boarding facility in Houston, MO about 45 minutes from me, began volunteering and was later employed there (at TASTC – The Animal Shelter of Texas County and Bark Plaza Pet Boarding). Sadly, due to financial problems, TASTC closed leaving an enormous void of services for homeless pets in need. Shortly after that, Diana’s Grove Dog Rescue (located in the same county) closed as well. There were zero animal rescues or shelters remaining to serve the largest county in Missouri. During my time at TASTC, I had helped transport the overflow of dogs and puppies in need to the APA. They were the lifeline (and still are) that allowed us to help so many pets in need – as such a rural and low populated area had few adopters and was too far from major cities to be convenient for many people to travel to for adoption. Despite being sparsely populated with people, the rural areas of Texas County, MO and the surrounding areas are very densely populated with unwanted dogs and cats due to so many of the residents living below the poverty line and a lack of animal welfare resources such as low-cost spay and neuter.

Shortly after both organizations closed at the beginning of 2017, a group of concerned people came together to form The Barking Bridge Project, which is the organization that I am part of. Two of the major services that we provide to the communities we serve are low-cost spay/neuter and rescue coordination/transport. The APA has been a vital part of both of those programs – allowing us to help more animals than we otherwise could have. Part of our low-cost spay/neuter program involves working with the Carol House Quick Fix Pet Clinic and the APA and these partnerships have been vital in helping to spay and neuter dogs in those communities who otherwise would not have had the opportunity and would have continued to procreate in the already overpopulated region.

The APA’s transfer program has always been vital to the homeless and unwanted animals in the areas we serve as well. Not including the animals I transported to the APA during my time at TASTC, I have driven more than 1,500 at-risk animals to the APA. They’ve ranged from tiny kittens, cats, rabbits, birds and numerous dogs and puppies. Among all the different circumstances, there were pets whose owners could no longer care for them, animals who were found as strays, those whose time was up in a rural pound and companion animals whose owners moved away and cruelly left them behind. Each one of them was important, every one of them had feelings, and all of them were desperate for a second chance at a good life. The APA provided that and even more for them. The vast majority of the animals we have transported to the APA had never received any veterinary care prior to their arrival. Some suffered from heartworms and the APA provided the life-saving treatment they needed. Many had bullet wounds and infected bite wounds from the harrowing lives they once had. Several were pregnant and sought refuge at the APA and in the homes of so many kind fosters who provided them with the safety and care they needed to nurse their babies under veterinary guidance and away from predators and parasites that they would have otherwise (and many had previously) endured. Dogs with broken limbs were doctored and able to run again, and formerly mistreated animals learned to trust again under the love that the staff and volunteer. Not only did the APA save the lives of hundreds of these animals, but they provided them with quality lives – enriched by humans who love them and spoil them. Many of these pets who once struggled to survive, now live a life of leisure – hopefully forgetting the pasts they were able to escape from. I was asked what my favorite thing about being a transporter was. It’s not the driving all those miles or even seeing so many cute puppies – it’s that after knowing what they’ve been through – I can do my part to help make sure that their tomorrows are so much better than their yesterdays. I am grateful to the APA for being a safe haven to so many pets in need – healing them both physically and emotionally and providing them with loving homes.”

We’re so grateful that we’re able to help pets in the communities where it’s most needed, thanks to wonderful people like Shayla.