For a Healthy Workplace, Bring Fido Along

This Friday is Take Your Dog To Work Day, a great chance for offices to open their doors to our beloved four-legged family members. Although Take Your Dog to Work Day occurs just once a year, more companies are recognizing the perks of having pets in the workplace and offering employees the option of working alongside their faithful companions. 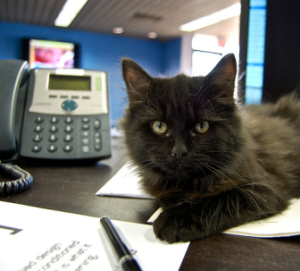 Companies such as St. Louis’ own Purina and Build-A-Bear, along with Amazon, Google and Ben & Jerry’s, all allow furry friends to accompany their pet parent during their 9-5.

Research is showing that it’s not a bad idea at all. A 2012 study from Virginia Commonwealth University showed that the stress hormone cortisol was lower, much lower, among workers who brought their dogs to work than those who did not.

The Indianapolis Star reports that, as the workday progressed, researchers found stress levels dropped 11 percent among workers with pets, while they increased 70 percent among those who were without their animals.

The Centers for Disease Control and Prevention also cites lowered blood pressure and cholesterol levels as benefits of having pets around.

As if that weren’t enough reason to put your pet in your cubicle, companies with pet-friendly policies also report that employee morale receives a boost, coworker relationships improve, physical activity levels are higher and employee turnover is lower when pets are around. Purina sees so much benefit in allowing pets in the workplace that they have initiated the “Pets At Work” campaign that emphasizes the perks of animals in the office and helps companies get started with their own pet-friendly policies.

So, the next time you approach your boss about bringing Fido or Kitty to work, just let him or her know that you want to do it for the good of the company. They might just consider it. 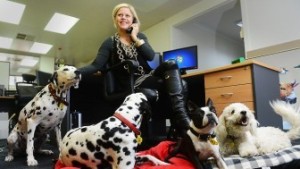 The more the merrier!

Join us for the 30th annual Canine Carnival on September 25 at Tilles Park.