Pets Make Our Lives Better: The Story of Carrot and Basant 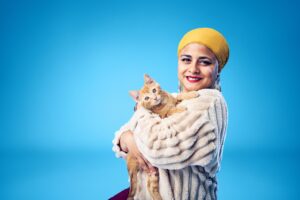 Pets make our lives better. They bring joy and smiles, and in rough times, they bring us comfort and give our spirits a boost. At the APA, we are fortunate to see the impact pets have on others each and every day.

Before coming to the United States, Basant was scared of cats and dogs. Growing up, she never had pets. In her second year of school in St. Louis, her depression symptoms returned and she started seeing a psychiatrist. Basant started to like dogs and her psychiatrist agreed having a pet would help her depression. However, she wasn’t ready for a pet of her own and also learned her lease would not allow dogs. So, in 2017, she started fostering kittens. Basant wasn’t sure about cats and felt nervous when they would climb on her, but quickly got over that feeling, and it turned into pure excitement. “I loved them so much,” Basant said.

Basant fostered another litter before she had to stop because it wasn’t feasible with her roommates and space. Basant explained, “It was very hard on me staying away from cats, that’s when I started volunteering in the cat room at the APA.” After a while, she decided she was ready to adopt her first pet. Basant noticed a little orange kitten, teasing another kitten in his kennel. He was shy when she reached for him and hid. Basant was patient, carrying and petting him, and after a while he started purring like a machine.  She adopted Carrot that day.

“He’s a very special boy, he has to greet me every morning and every afternoon when I get back home by jumping in my lap and licking my nose. He’s basically my family here,” said Basant. Carrot was found as a shy, stray kitten who was nervous of people. Both Basant and Carrot started out afraid of one another, but together have found love and family.