A Purpose for Patches

Sometimes when we find our purpose in life, everything else just falls into place. APA alum Sonar (Patches) found a career, but he also found his new family.

Those who never met Patches never saw his unstoppable love of toys. They never saw how, every day on his walks at the APA, Patches raced out to the toy box in the dog park to pick out his own stuffed animal or ball, or both, if he could fit them in his mouth. They didn’t see how we bent the “outside only” toy rule for Patches so that he could carry his all the way back to the kennels before releasing it. 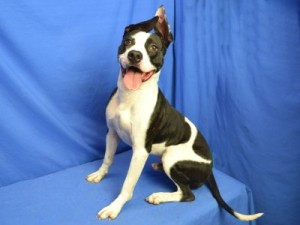 People did, however, see his ears. Those long, pointy ears that always stand erect and usually cross in the middle are what visitors to our Adoption Center noticed about Patches.

Unfortunately, it was often the only thing they noticed. For 6 long months, the big black and white pup with funny ears sat in his kennel, rarely requested to visit with potential adopters. That is, until last May, when Mary Roy noticed something more.

A member of the Missouri Task Force, Mary trains dogs to find people in the rubble of collapsed buildings after tornadoes, earthquakes and terrorist attacks. It’s a high-pressure job that requires organization, precision and extraordinary focus. Dogs that do well in these situations are hard workers who have an uncanny ability to zone in on their target and get to work. When Mary began looking for a new Search and Rescue dog to join the team, she knew exactly what qualities she wanted in a pup. Mary called the APA to ask the staff if we had any high energy dogs whose love for toys bordered on obsession. We told her we had just the dog for her.

A few days later, Mary arrived at the APA to visit with Patches. She took him out back to the dog park to test his toy drive. A good Search and Rescue dog, she said, would have an incredible drive for the toy and stop at almost nothing to get his prize. Unsurprisingly, Patches acted like his usual toy-obsessed self and passed the initial visit with flying colors.

However, Mary couldn’t guarantee that Patches would do well as a Search and Rescue dog without first taking him to “the rubble,” a training ground for Search and Rescue dogs in Columbia, Missouri. While Mary filled out the paperwork to foster Patches for his initial skill tests, the energetic pup climbed and clambered around the desk, trying to get to the toy he had previously been playing with. “Look at him go,” laughed Mary.

And go he did!

Not only did Patches pass those first tests, but this week, almost exactly one year later, Mary called to update us on a huge accomplishment for Patches, now appropriately named Sonar: he passed his FEMA certification and is now a certified Search and Rescue dog for the Missouri Task Force! 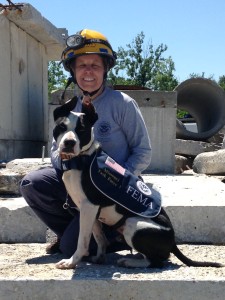 Mary reports that Sonar is absolutely phenomenal at search work. His drive to track a scent is exceptional, and his agility skills are off the charts. Mary’s fellow trainers often tell her they’ve never seen a dog better at the job than Sonar. 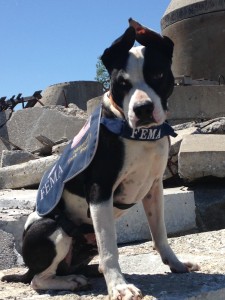 When Sonar isn’t training, he is part of the family at home with Mary and her husband. While Mary absolutely loves her pup, she recognizes that he isn’t the family pet for everyone.

“Sonar is very high energy. He’s either going full speed or sleeping. He’s been known to get into mischief when left alone, but that comes with the territory with these working dogs. He is just such a happy, upbeat pup- I’ve never had a dog that made me laugh as much as he does.”

We couldn’t be prouder to see a former Lonely Hearts Club member performing such valuable and amazing work. Congratulations to this great pup, and thanks to both Sonar and Mary for the service they provide to our communities when we need it most!

Bringing a new pet into your home is a life-changing experience. We’d love to hear about your adoption story, from first sight to today.

Join us for the 30th annual Canine Carnival on September 25 at Tilles Park.